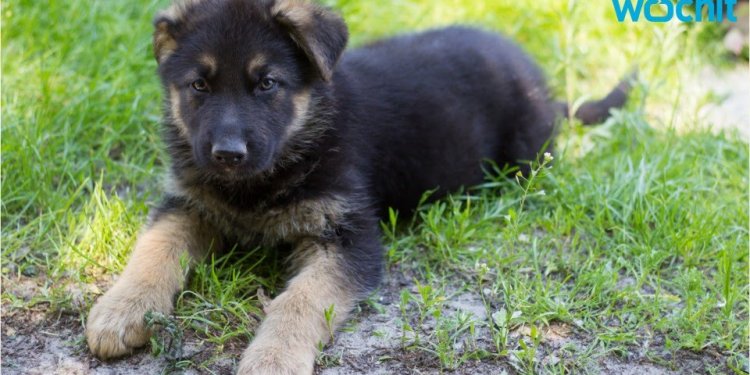 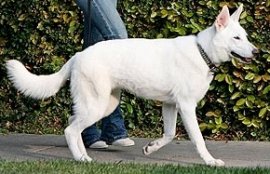 White German Shepherd dogs are exactly like their traditional German Shepherd breed "cousins" with the exception of their color, which is usually a pure white. The white coat actually comes from a recessive gene. It was placed in the gene pool for the breed in the late 19th and early 20th centuries in Germany, specifically for the breeding program that expanded and developed the breed originally. Horand von Grafath became the dog that provided the foundation for all German Shepherd dog bloodlines. His grandfather, Greif, was actually a white herding-type dog.

The earliest German white herding dogs had a similar body shape and facial profile, including upright ears, that is typical of the White German Shepherd. What is today’s White German Shepherd itself began to emerge in the early 20th century, as breeders carefully inbred lines to produce white-coated dogs and to expand the number of German Shepherd dogs available in general. In 1912, the first German Shepherds were imported into the United States by Anne Tracy of New York; white puppies were born in the first litters.

To put it simply, the German Shepherd in general is a strikingly beautiful dog already, but the white coat of the White German Shepherd makes it perhaps even more beautiful. There are no colors or markings to distract. One simply notices the dog's proud physique and quiet but confident demeanor.

As might already be apparent, the White German Shepherd dog has the same athletic, muscular build as its normally-colored German Shepherd "cousin, " with erect ears, long muzzles with usually black noses, and keenly intelligent eyes. These active, curious and hardworking dogs are medium-sized, usually weighing between 77 to 88 pounds in adulthood.

Temperament
As with traditionally-colored German Shepherd dogs, White German Shepherds are very intelligent, brave, alert, and absolutely fearless. Among the things you notice about them most are their quiet confidence and superior skills. These dogs want to work, and in fact crave something to do. Because of that, they make excellent police and guard dogs, bomb or drug-detecting dogs, and service dogs. They are often used in the military and in police forces.

These dogs rely on structure and discipline, and the best owner is one who will provide calm, quiet command. Although White German Shepherds are indeed obedient, loyal, loving, and valiant, they need to be treated as a submissive member of the pack. They need strong leadership from the leader of their pack, meaning you, the owner. If they're not given such structure and discipline, they can actually sense that the owner is weaker than they are and may try to take over as pack leader. Dogs that are not properly socialized and trained can become aggressive and dangerous, or, conversely, skittish and afraid. Even dogs that are skittish and afraid, however, can become dangerous, since a fearful (or “shy”) dog will bite.

Because of that, the White German Shepherd needs to be trained from puppyhood forward in a firm, consistent, stable manner. They do not respond well to abusive or overly aggressive treatment, but calm, consistent, and firm discipline is not only welcome, but necessary.

Trained properly, White German Shepherds are cheerful, obedient, and exceedingly smart. They perform superbly as guard dogs and service dogs, and also make great family pets, even in families with children. Once they know they must protect those in their families, they never stray from the job they've been appointed to do.

Again, the best-behaved dogs must have a task to do, something for which they are responsible every day. They learn very quickly and can be shown something just a couple of times to know how to do it perfectly. Because they are such hard workers and so focused, they don't distract easily once they're on task. Even with small children around, they rarely bark, only doing so if they sense someone they love is in danger.

Environment and Best Living Conditions
As long as they get enough exercise, White German Shepherds are content even in apartment settings. However, they absolutely must get vigorous exercise every day. They cannot accept simply sitting and doing nothing. Their keen intelligence seeks constant challenge and they thrive when they can fulfill a job that has plenty of activity involved, such as that of a service dog. They also adore both physical and mental demands, so teaching them new things as part of their job duties (or simply as a matter of course) is something they truly enjoy. Dogs that aren't properly stimulated both physically and mentally can actually become destructive.

Health Problems
White German Shepherd dogs are quite hardy and healthy for this size breed, and live an average of 12 years. They are prone to common joint diseases and disorders including hip and elbow dysplasia and degenerative joint disease. Particular to some lines of the White German Shepherd are autoimmune diseases like lupus as well as congenital spinal disease. They may also suffer from malabsorption syndrome.

What is notable about the White German Shepherd is that because they are such hardy, hardworking and noble dogs, you may not know something is wrong with your stoic pet until it is very sick indeed. It's imperative to take your dog to the vet for regular checkups even when it appears fine. Doing so can help keep small problems from becoming bigger ones, and can catch serious disease early.

Grooming
White German Shepherd dogs are shedders, sometimes extensively, especially in the spring. These long-haired dogs don't have an undercoat, and have stiff hair. Since they shed consistently throughout the whole year, they require daily brushing. As with all dogs, they can be prone to fleas if exposed, and can have skin problems if bathed too often.