Often known as the Labrashepherd or the Sheprador, the German Shepherd Lab mix has become a popular hybrid. Both the parent dogs are known for their intelligence and loyalty, which makes this mix an excellent choice for families. Since they have plenty of energy, these dogs need plenty of training and exercise. If you have an active lifestyle, these dogs make excellent companions for all those outdoor, active activities. Here is a closer look at this hybrid, the history of the dogs, their appearance, temperament, and other essential information.

Within the past 30 years, many designer or hybrid dogs have been bred, and there is no real way to figure out exactly when the German Shepherd Lab mix was first created. However, it is possible to take a look at the origin and history of both of the parents.

The German Shepherd traces back to Germany, where it was originally bred in the late 19th century. It was originally bred to be a sheepherder, but eventually it would go on to work for military and police. Later the dog breed would be used in both World War I and World War II. Today the breed makes a great family dog and watchdog, and the dog continues to work in many roles.

The Labrador Retriever, which originates in Newfoundland, was bred back in the 1700s as a dog that would aid fisherman with retrieving and other activities. Englishmen visited the area, and liking the dogs, they took a few back to England. It was there where these dogs were called Retrievers. They thrived in England, while they began to disappear in Canada. Later the breed would be imported to America. Today the Labrador Retriever I one of the most popular purebred dogs in multiple countries, including the United States, Canada, and Great Britain.

The German Shepherd Lab mix is quite large, and these dogs generally weigh between 50 and 100 pounds and can be between 20 and 27 inches tall. Many have the face of a lab, although it’s possible for the hybrid to have a German Shepherd face. These dogs have dark brown eyes and a stocky body, and the tail can be long and fluffy like a Shepherd or otter-like like the lab’s tail. Some of the common coat colors of these dogs include tan, brown, white, and black, while some may be a combination of these colors.

In most cases, the German Shepherd Lab mix is full of energy, intelligent, loving, and a little cautious around strangers. Since they have the Shepherd characteristic of being cautious with strangers, they often make great guard dogs or watch dogs. The Sheprador is usually kind, loving, and even tempered with the family. Since these dogs are quite active and they thrive on mental stimulation and exercise, they need plenty activity or they may turn to mischief, engaging in unwanted behaviors, such as barking, digging, or chewing. When socialized and trained properly, these dogs can be great with kids, although it’s always important to supervise children with any breed of dog.

Since the German Shepherd Labrador mix has a double coat, they do tend to shed a lot, particularly a couple times a year. It’s important to brush these dogs daily to prevent shedding. Regular brushing will remove shedding hair and keep their coat and skin healthy. These dogs should only be bathed as needed with a special dog shampoo that won’t damage their skin’s natural oils.

Both the Labrador Retriever and the German Shepherd were bred for working roles, and the German Shepherd Labrador mix can make a great working dog as well. Since they are alert and protective, these dogs make excellent watch dogs and guard dogs, and may do well working with police and military. The Sheprador may also excel in agility competitions, search and rescue, retrieving, and tracking. 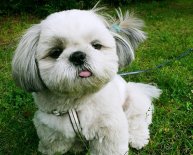 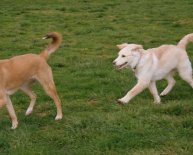