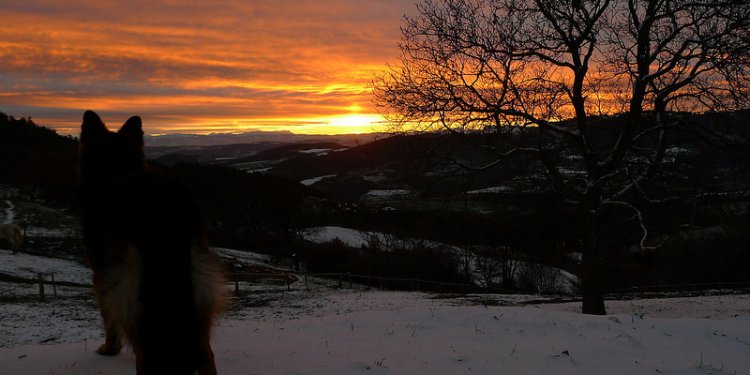 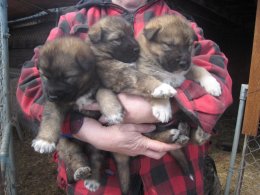 You’ve been reading or watching Game of Thrones. You’ve lovingly lingered over the descriptions of Gray Wind running into battle with Rob. You cried for Lady and cheered when Nymeria used Joffrey’s arm as a chew toy. Perhaps you’ve even caught yourself looking back over your lease agreement and wondering if “dire wolf” qualifies as an exotic pet. 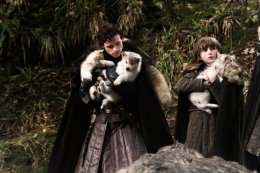 Unfortunately, you’re a few millennia late for the real thing: While real dire wolves once roamed the Americas, Canis dirus went extinct about 10, 000 years ago, with no descendant species. Northern Inuit Dogs — HBO’s choice for dire-wolf stand-ins — more closely resemble the modern gray wolf, , which is not only illegal to keep as a pet in the United States but more likely to share the temperament of the feral, skittish Shaggydog than gentle Lady. 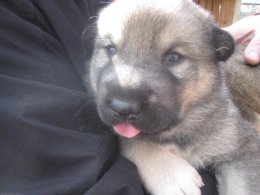 But while wolf-dog hybrids often come with many of the same temperamental and legal issues as their wilder cousins, there may be another option for those seeking a large, wolfy companion: the Dire Wolf Project, undertaken by the American Alsatian Breeders Association.

According to breed founder Lois Schwarz, the Dire Wolf Project is an attempt to bring back the look of the extinct dire wolf in a domesticated companion dog breed. How close have they come? I visited Schwarz Kennels, home of the Dire Wolf Project, in White City, Oregon, to find out.

Lois Schwarz has been breeding dogs since 1975, and began developing the American Alsatian breed in 1987 with the goal of a large, long-lived companion dog. 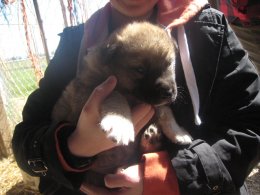 Schwarz wanted a wolflike appearance, but with a wider and heavier-set physique than the slender gray wolves; her project found its name when her daughter pointed out that the physical characteristics Schwarz was aiming for might better describe a prehistoric dire wolf.

It’s worth noting that the Dire Wolf Project isn’t a true breeding back project; there are no known surviving samples of dire wolf genetic material, and Schwarz’s selective breeding for aesthetics is entirely different from scientifically based de-extinction projects like the effort to resurrect the passenger pigeon. Schwarz hasn’t made a detailed study of dire wolf physiology or bone structure, or sought significant input from a paleontologist or geneticist. And even if she had, no concrete evidence as to the coloration or coat of C. dirus exists.

That said, American Alsatians look really cool. They’re distinctly wolfy, but wider, shaggier and warmer in color than huskies, malamutes or modern gray wolves. Basically, they’re the kind of fantasy wolves that wouldn’t look out of place howling at a T-shirt moon, which may be exactly the sort of pet that a lot of would-be members of House Stark are looking for. 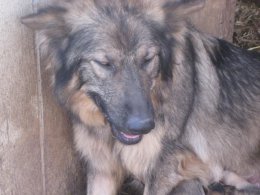 Topping out at 130 pounds, American Alsatians are not quite up to dire wolf size, but in that regard Schwarz says the breed will be informed more by practicality than accuracy. Few families are looking for a 160-pound dog, and Schwarz is anxious to avoid American Alsatians ending up at the pound.

And what Schwarz’s dogs lack in prehistoric dire wolf minutiae, they make up for with their pleasant temperament. The cluster of characteristics she claimed to be able to breed for consistently — intelligent, alert pups who would seek human contact but sit calmly instead of chasing or barking — seemed unlikely, especially for a breed whose ancestors were primarily working dogs.

Then, I met my first American Alsatian puppies. At four weeks, they crawled up wide-eyed and alert to investigate my shoes, as their mother Autumn sat patiently by.

“Watch this, ” Schwarz told me. “This is a temperament test.” She dropped a large chest of tools on the ground with a clang. I jumped, but the puppies just glanced lazily over before continuing about their business. Even as puppies, American Alsatians are noticeably calm, whether they’re exploring their environment or scooped up in your arms; it’s easy to believe Schwarz’s claim that many end up companion or therapy dogs for owners with special needs. 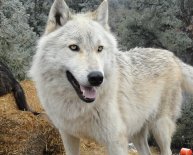 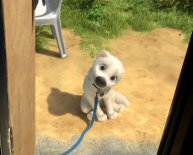