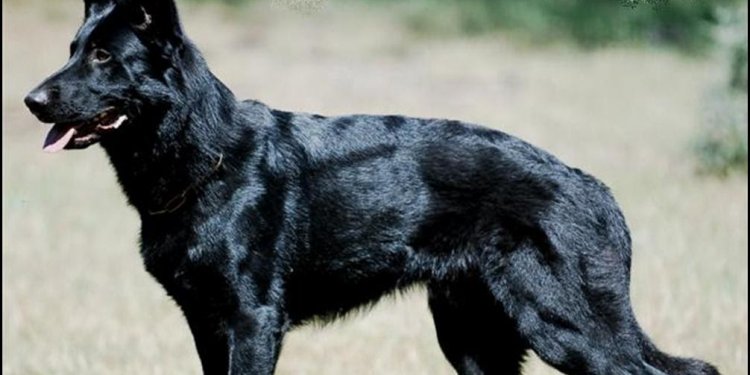 When we visualize any German Shepherd, most people probably think of guard dogs with a commanding presence and the familiar black and tan color pattern. The Black German Shepherds are often mistaken for another breed or a mixed breed. They are clearly true German Shepherds with closer genetic traits to the original breed than the “standard German Shepherd”. Two genetic possibilities produce the black coat: the combination of two recessive genes or the presence of a dominate black gene. Only 6.8% of all German Shepherds in the world are black. According to Max Von Stephanitz, the developer of the breed, the color or pattern markings do not affect the dog in any positive or negative ways. Owners of black shepherds differ on this subject. They view the Black German Shepherd’s physical traits and personality aspects to be superior.

History of the Breed

German Shepherds were developed in Germany in the late 1800s. Max von Stephanitz has been recognized as the father of the breed. German Shepherds were the results of crosses between native herding dogs and farm dogs in northern and central Germany. Their original purpose was to manage large flocks of sheep by steady and stealthy movements in order to not panic the sheep.

The German Shepherd Dog (GSD) breed made its appearance in the United States in the early 1900s. The GSD had its greatest boost in popularity after World War I. GSDs served alongside American soldiers as messengers, sentries, rescuers, and personal guard dogs. German Shepherds, such as Rin Tin Tin, promoted the breed as loyal family dogs and guardians. Farmers liked German Shepherds because of their great herding skills, intelligence, and stamina. The American Kennel Club officially recognized the German Shepherd Dog in 1908 as part of the Herding Group. Experts did not recognize the Black German Shepherd as a separate breed or an offshoot of the GSD breed. For classification purposes, they are viewed as GSDs. Although, the dogs retained their shepherding heritage, German Shepherds became commonly known as service animals and family companions. GSDs consistently remained in the top third of the AKC’s most-registered breeds. This has secured their spot as one of the country’s most admired dogs. The Black German Shepherd became the most expensive GSD for purchase. They are regarded by their owners as the best choice for service, intelligence, and loyalty.

From early herding dogs and farm dogs, the Black German Shepherd Dog of today meets the versatility needed to excel at various jobs of assisting, protecting, and serving.

Black Male Shepherds are very regal looking, and the females are more petite with softer feminine features. All GSDs have a bone structure that is light and solid. The head is in proportion to the body. The forehead is a little rounded. The nose is most often black. The teeth meet in a strong bite like scissors. The eyes are almond-shaped and dark. The ears are wide at the base and upright. They are turned forward. The tail is bushy. It reaches below the hocks and hangs down when the dog is at rest. The front legs and shoulders are muscular. The thighs are thick and sturdy. The feet are round with very hard soles. There are three varieties of the German Shepherds coat: double coat, plush coat and longhaired coat. All black is one of the predominate colors of the coat along with the black and tan pattern, and sable.

The breed’s personality is quite distinct….loyal, poised, eager, and alert. The ideal Black German Shepherds are approachable, but quietly stand their ground. These dogs are courageous, self-confident, and aloof. Black German Shepherds tend to have a stable personality. Friendships have to be earned. Once friendships are established, their devotion is life-long. They tend to bond well with children, but they need to be introduced slowly to young children and boundaries need to be set. Black German Shepherds are better known for getting along exceptionally well with other animals in the household (even cats). They need attention and time with their family or companion. This special trait is what makes them perfect candidates to work as service dogs for the blind, deaf and handicapped. Shepherds enjoy participating in outdoor family activities such as running, hiking, and swimming. They look forward to regular walks. Black German Shepherds are comfortable living outdoors or indoors as long as they have balance in their daily schedule. They are particularly well suited for obedience training. Since they belong to the herding group, they are intelligent problem-solvers. This highly intelligent and trainable dog thrives and excels with having a job to do. Black German Shepherds can be trained to do almost anything. This allows the dogs to eagerly serve as companions, watchdogs and service dogs.

**Any signs of aggression, indicates a problem that needs immediate professional attention.

Black German Shepherds experience many common health problems as a result of inbreeding:

Most of the time hip dysplasia is hereditary. There is nothing to prevent it, but there are several courses of treatment. Weight management is crucial.

This a neurological disease. It occurs with enough regularity in the breed that it indicates that the breed is predisposed to this disease.

This is an inherited bleeding disorder.

It is a degenerative disease of the pancreas which is treated with supplements. Only a small percentage of dogs are affected. 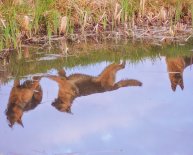