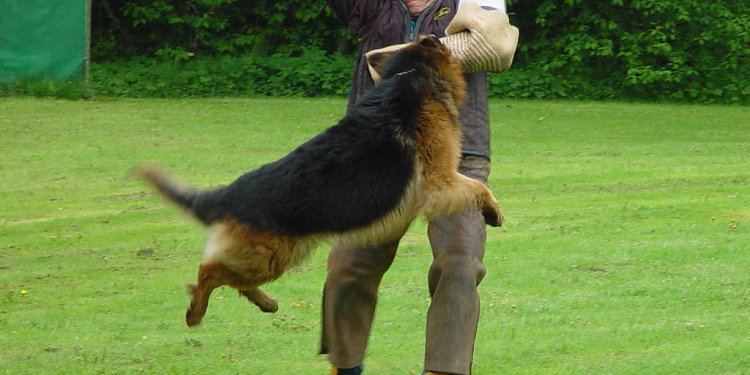 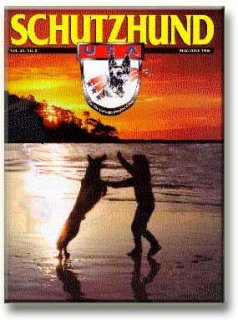 Politics are the worst part of this sport.

In my opinion Schutzhund USA is a corrupt organization with weak leadership. I was a member of Schutzhund USA from 1976 to 2008 and it saddens me to have to make these claims.

Schutzhund USA fosters a good old boy network that empowers bullies in the sport who have elevated cheating to an acceptable level of tolerance.

If you are considering training in this sport I strongly recommend that you look at the DVG. The DVG is an all breed schutzhund organization with origins in Germany.

In fact a better choice would be to look at the Mondio Ring Sport rather than Schutzhund. The Mondio Ring is a relatively new dog sport that the dogs love. It has no tracking. Had Mondio Ring come to American in the early 1970 like Schutzhund did back then. Mondio would be the dominant biting sport in America today.

This article has been on my web site since 1994. I have chosen to leave this article for those who want to learn about the sport.

Schutzhund is a German word meaning "protection dog." It refers to a sport that focuses on developing and evaluating those traits in dogs that make them more useful as breeding dogs and happier companions to their owners.

The original purpose for the sport of Schutzhund was to develop a dog sport that could measure the working ability of the dog so that information could be used in a breeding program to develop better working dogs with good temperaments. 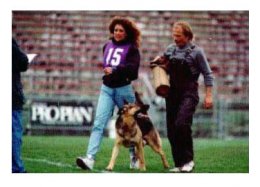 Schutzhund work concentrates on three parts. Many familiar with the obedience work of the American Kennel Club's affiliates will recognize the first two parts, tracking and obedience. The Schutzhund standards for the third part, protection work, are similar in some ways (not all) to police work or personal protection work.

While dogs of other breeds are also admitted to Schutzhund trials, this breed evaluation test was developed specifically for the German Shepherd Dog. Schutzhund is intended to demonstrate the dog's intelligence and utility. As a working trial, Schutzhund measures the dog's mental stability, endurance, structural efficiencies, ability to scent, willingness to work, courage, and trainability.

This working dog sport offers an opportunity for dog owners to train their dog and compete with each other for recognition of both the handler's ability to train and the dog's ability to perform as required. It is a sport enjoyed by persons of varied professions, who join together in a camaraderie born of their common interest in working with their dogs. Persons of all ages and conditions of life-even those with significant disabilities-enjoy Schutzhund as a sport. Often, it is a family sport.


The Three Parts Of A Schutzhund TrialTHE TRACKING PHASE includes a temperament test by the overseeing judge to assure the dog's mental soundness. When approached closely on a loose leash, the dog should not act shyly or aggressively. The track is laid earlier by a person walking normally on a natural surface such as dirt or grass. The track includes a number of turns and a number of small, man-made objects left by this person on the track itself. At the end of a 30-foot leash, the handler follows the dog which is expected to scent the track and indicate the location of the objects, usually by lying down with it between its front paws. The tracking phase is intended to test the dog's trainability and ability to scent, as well as its mental and physical endurance.

The OBEDIENCE PHASE includes a series of heeling exercises, some of which are closely in and around a group of people. During the heeling, there is a gun shot test to assure that the dog does not openly react to such sharp noises. There is also a series of field exercises in which the dog is commanded to sit, lie down, and stand while the handler continues to move. From these various positions, the dog is recalled to the handler. With dumbbells of various weights, the dog is required to retrieve on a flat surface, over a one-meter hurdle, and over a six-foot slanted wall. The dog is also asked to run in a straight direction from its handler on command and lie down on a second command. Finally, each dog is expected to stay in a lying down position away from its handler, despite distractions, at the other end of the obedience field, while another dog completes the above exercises. All of the obedience exercises are tests of the dog's temperament, structural efficiencies, and, very importantly, its willingness to serve man or woman.

THE PROTECTION PHASE tests the dog's courage, physical strength, and agility. The handler's control of the dog is absolutely essential. The exercises include a search of hiding places, finding a hidden person (acting as a human decoy), and guarding that decoy while the handler approaches. The dog is expected to pursue the decoy when an escape is attempted and to hold the grip firmly. The decoy is searched and transported to the judge with the handler and dog walking behind and later at the decoy's right side. When the decoy attempts to attack the handler, the dog is expected to stop the attack with a firm grip and no hesitation. 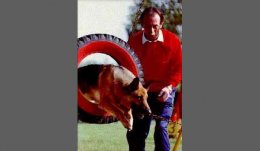 The final test of courage occurs when the decoy is asked to come out of a hiding place by the dog's handler from the opposite end of the trial field. The dog is sent after the decoy when he attempts to run away. Just when the dog is about to catch the decoy, the judge signals the decoy to turn about and run directly at the dog, threatening the dog with a stick. All bites during the protection phase are expected to be firmly placed on the padded sleeve and stopped on command and/or when the decoy discontinues the fight. The protection tests are intended to assure that the dog is neither a coward nor a criminal menace.


Schutzhund Around The WorldThe first Schutzhund trial was held in Germany in 1901 to emphasize the correct working temperament and ability in the German Shepherd breed. Originally, these dogs were herding dogs. But the industrialization of Germany encouraged breeders to promote the use of their dogs as police and military dogs. The Verein fur Deutsche Schaferhunde (SV), the parent club, became concerned that this would lead to careless breeding and undesirable traits such as mental instability, so it developed the Schutzhund test.

Since then, many other countries and working dog organizations have also adopted Schutzhund as a sport and test of working performance in dogs International rules have been established, and they are administered by the Verein fur Deutsche Hundesport (VDH).

In 1970 the first Schutzhund trial in the U.S. was held in California. In 1987, the United Schutzhund Clubs of America alone sanctioned nearly 300 trials with a total entry of about 1, 800 dogs/handler teams. More than 17 countries sent teams of competitors to the World Championship for Schutzhund dogs from the World Union of German Shepherd Clubs.


There are three levels of the Schutzhund test. For Schutzhund I the dogs must be at least 14 months old and pass an initial temperament test by the judge. The dog must heel on the leash and off, demonstrate the walking sit, the walking down, and the stay tests, as well as the send-out. It must retrieve on the flat and over a hurdle. In tracking, it must be able to follow a track laid by its handler at least 20 minutes earlier. There are also protection tests. 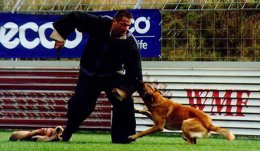 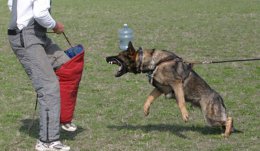 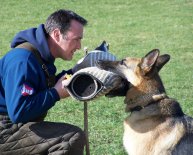